Food Storage jar is an important part of the current food industry, and it is of great significance to prevent food contamination and oxidation. However, due to the contact of food and substances and the influence of various external factors, food contamination has caused varying degrees of harm to human health. 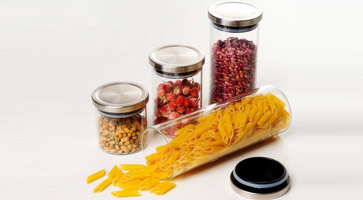 Paper materials can generally be made into containers of various shapes, such as bags, boxes, cans, and boxes, and are widely used in industries. The pollution caused by these packaging products mainly comes from the lack of cleaning of various chemical substances used in the materials themselves, and has a certain impact on food.

Generally speaking, most plastic products have strong corrosion resistance and rarely react with acids and bases. At the same time, plastic is waterproof, light in material and low in cost. Materials that should be widely used at present. Plastic itself is not toxic. The main reason for its contamination of food is some external additives.

These metal food storage jars are easy to recycle and easy to process. So, compared to paper scraps and plastic waste, they have a relatively small impact on the environment. The most commonly used metal materials are aluminum and iron, most of which are highly safe and will not contaminate food. However, some products will use tin plated tinplate tubes. After the outer coating reacts with organic acids in food, toxic organotin salts will be produced.

Glass food storage jars are considered inert and generally do not react with the food in the package. At the same time, during the firing process of glassware, colorants are often used for coloring to prevent external light from entering and causing varying degrees of damage to food. Generally speaking, food contamination mainly comes from the glass softener itself. Because the softener is mainly arsenic, it is very easy to cause human poisoning.

The pottery food storage jar is beautiful in itself, with a wide range of raw materials, can be used many times, and plays a good role in protecting the original taste of food. But the overall combustion temperature is too low, and its products are easy to dissolve a large amount of lead and cadmium, which affects the health of food.